Military service brought George to the east coast in the late 1960s. Later, he would venture to the big apple landing a job as salesman for a plastics company. Because of his natural charisma, however, he turned a sales call at the local radio station into a permanent role at WOR Radio, New York. 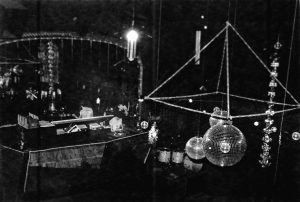 George noticed the rising popularity of disco music in New York and began forming a niche on the radio surrounding the trend. Already, the writing was on the wall for George in the world of party promotion and entertainment. With backing from WOR Radio he hosted one of his first promotional events. The hype surrounding these parties caught wind and word started to spread across the city. Celebrities and party-goers all over waited impatiently to be invited to George’s events.

The parties quickly grew in size as word of mouth spread. Booking at George’s venues would soon prove too small to handle the crowds. This lead George to create New York’s famous disco, Galaxy 21.

Galaxy 21, situated on 256 West 23rd Street gained widespread notoriety. This was the era of disco fever with many clubs, like Studio 54 gaining national attention. Galaxy 21 helped shape the disco trend while thousands flocked to its doors; this was the place to be. Disco provided what guests knew and loved, 24/7, and without any dilution. George managed to create a space that would bring together people from all walks of life under one roof, for the love of music.

Sadly, regardless of its successful run Galaxy 21 saw its end after only a few short years. Property disputes introduced complications to the club, and by the end of 1976, politics and court hearings forced Galaxy to close. This was mostly due to influential landlords that managed to transfer their utility debt to the club’s name.

Luckily this was not the end for George; instead of giving up, he moved on to one of the biggest projects of his life: The Monastery.