People learn in two ways: through their own experiences, or through the experiences of others.  In the Great Depression, Americans learned that unchecked financial systems can lead to a national catastrophe, and as a result built regulations to prevent it from happening again.  The lesson was forgotten, however, and the protections were removed with the mantra of “We know better now!”. In 2008, America found the financial sector coming to them, hat in hand, begging to be saved from their own greed.

In the early 1970s, George Freeman was actively behind the scenes at WOR Radio, New York…even when owners and managers were against an opposing view there were laws (such as the Fairness Doctrine) helping to regulate conflicts of interest within the world of broadcasting.

During the rise of dictators in Europe and Russia in the 1930’s, the FCC realized that granting more voices was the antidote to the singular voices of fascism and control.  Thus the FCC introduced “The Fairness Doctrine” mandating stations give equal time to opposing political views. Rather than just parroting propaganda points, the media fairly presented both sides of legitimate issues and allowed citizens to respond to editorial content.

In the early 1970s, George Freeman was actively behind the scenes at WOR Radio, New York. During his tenure George performed various regulatory audits keeping the station in good standing with federal guidelines. He recognized that, even when owners and managers were against an opposing view there were laws (such as the Fairness Doctrine) helping to regulate conflicts of interest within the world of broadcasting. These regulations attempted to improve broadcast integrity and reporting. These regulations sought to clear the way for citizens to make up their own minds from the available facts, rather than indoctrination from partisan politics.

In later years, another FCC rule would prevent the same company from owning more than 39% of US markets, a rule reinforced in 2004 under George W. Bush. Section 629 stated: “A person or entity that exceeds the 39 percent national audience… shall have not more than 2 years after exceeding such limitation to come into compliance…” 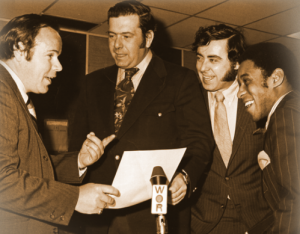 The meaning of this law is clear – no one should control the national media market.  This law, it was believed, would prevent the nightmare observed in dictatorships where citizens are told in a chorus how their Great Leader is to be obeyed without question.

The FCC later removed this rule, and nightmares became real as Sinclair Broadcast Group forced local anchors in over 200 news stations to read a message about the “dangers of one sided stories.” This was the same Sinclair that attempted to air an anti-John Kerry documentary that claimed he was a traitor for trying to end the Vietnam War.  The same Sinclair that had a legion of local newscasters speak in Big Brother unison about the dangers of “slated” media  while having pro-Trump spokesman Boris Epshteyn’s segments as mandatory broadcasts in local news shows.  The same Sinclair Broadcasting that hired former “Russia Today” reporter to create presentations about how a “deep state” conspiracy was working against President Trump.

The FCC’s job is to protect citizens from tragedies of truth, but they now betray that mandate.  Their actions in repealing these rules is no accident; as FCC Commissioner Jessica Rosenworcel observed, “All of our media policy decisions have one thing in common: They are all custom built for the business plans of Sinclair Broadcasting.”  It is time citizens demand their government protect them, for citizens to boycott advertisers who use Sinclair Broadcasting services, and for the leaders of the FCC be removed for leaders who respect the public over business.  We’ve seen where monopolization of views lead; just look at Russia, China, and every other dictatorship of the 20th century. It is better to learn from their sad examples, than experience it for ourselves.