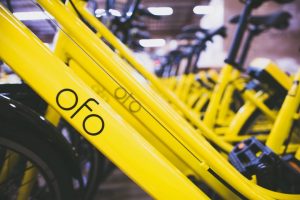 We couldn’t help but notice the latest pilot program rolled out by Seattle’s Department of Transportation (SDOT). The SDOT is allowing private bike sharing companies to park their bikes on public sidewalks and other areas. The aesthetic result of this program can be likened to litter. As of now, three companies (Limebike, Ofo, and Spin) operating free-floating, dock-less bike-share fleets around Seattle. But Seattleites are losing patience with the bike-share program. Many would argue that, in its current state, the bike-share program is poorly managed.

So what’s the gripe? Well, while the word “litter” has no implicit value it certainly defines a byproduct of this program where bikes are treated as garbage. Some bikes have even been tossed into Seattle’s Lake Union and surrounding ponds. “Litter” suggests an untidy, unkempt way of being and the people of Seattle care about their city.  By its very definition litter is “an untidy accumulation of objects.” In its verb form, littering describes dropping or leaving objects on the ground and leaving them there indefinitely. What was temporarily useful to one citizen may block the sidewalk for the wheelchair of another. If you’ve come across one of these bicycles yourself in the middle of the sidewalk you may understand our perspective. These bikes have become litter — perhaps worse, and only to be inevitably abandoned again somewhere else.

The idea of bike sharing is great: bikes (ecological, maneuverable, fast) plus sharing (I think we can all agree that sharing is great). But what these programs really offer their users is ease of use: hop on, ride wherever you want, and when you’re finished—hop off. Great for the user, great for the company, but what about the rest of us?

In the same vein, applications similar to Waze, which attempt to improve transportation problems have occasionally worsened its flow. Regardless, bike sharing apps now litter public spaces. Maybe, but—as with ride hailing companies—availability and ease are integral to their business model. So for these companies, more bikes in more places is integral to expanding their business, and unfortunately, they won’t worry about pairing these stray bikes with paying customers until the city forces them to.

To be clear, progressive politics should include pilot programs, like public bike sharing. Roadways, parks, and sidewalks are for public use and biking seems like quality public use, right? While these programs are far from expensive they still promote an elite program, of sorts. For one, these are app-based services, only available to smartphone owners, and payment is carried out via credit card. You may be thinking that these are two mainstays of modern life, but that poor soul sleeping on the bench in a public park would disagree.

Hopefully a better alternative will surface with a more inclusive business model and a more neighborhood-friendly approach. Whether by way of smartphone apps or pop-up bike huts, the bike sharing phenomenon is likely here to stay. Now comes the hard work of making it beneficial for all who use public areas.