There is an issue that seems to engulf the political and social conscience of our era: global warming. Though a deeply polarizing topic, particularly with regard to its implications and severity, the bigger scandal  can be found in the misinformation surrounding it. A study conducted by the American Meteorological Society showed that non-science students fail to understand the causes of global warming in a holistic manner. They tend to connect the matter with visible pollution more than consumption patterns.

Interestingly, 1/5 of greenhouse gas emissions result from livestock production, and with the rapid worldwide increase in meat consumption, the problem will only worsen as time passes.  As consumerism continues to dictate people’s lifestyle choices, and an increasing disconnect between these choices and the implications they hold is seen, there is all the more reason to appreciate the efforts of those who are opposing the tide and standing firm by their convictions of consuming with a conscience and participating in a vegetarian lifestyle.

George Freeman, the visionary behind Eden Seattle and Daddy G’s Restaurant … is among those opting in on the meatless diet.

These facts are not lost on George Freeman, the visionary behind Eden Seattle and 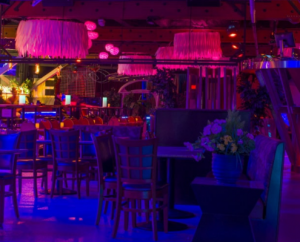 Daddy G’s Restaurant. More importantly, George is among those opting in on the meatless diet. Vegetarian people deserve praise for choosing a path that breaks away from conventional consumer patterns, and allows for more empathy and mindfulness for other living creatures and the planet.

In order for progress to pick up momentum, it’s equally important not to judge those who live life differently. Restaurants and services that provide natural, meat free options should take center stage. Freeman was ahead of his time in considering meatless food projects and recently opened Eden, a restaurant that had been in the pipeline since the 1970’s. Already, George has been testing options for new menu offerings. The long view will incorporate natural, meatless options. Such ventures are the need of the hour, and we should support people with a conscience all over the globe as they come together and push ahead.