Often times, big events like world Expo/World’s Fair or the Olympics bring big construction efforts and development contracts with long-term benefits.  In some respects, Seattle still thrives on development efforts from days past. Entertainment facilities scattered throughout downtown, such as KeyArena were part of the 1962 World’s Fair but lack contemporary upgrades. The KeyArena itself doesn’t have enough seats as a basketball arena and hotel accommodations are limited. But changes are on the horizon.

This is a great initiative, which many of the city’s well-wishers have lauded, including George Freeman during his run for city council.

The Washington State Convention Center (WSCC) is geared up to introduce a major addition to the city of Seattle Convention Center, which is expected to double its capacity. This move is meant to increase the city’s ability to host conventions and meetings, and to represent promise for greater activity in the times to come.  The preferred proposal, as per the mayor’s office, includes 1,165,000 square feet dedicated to the convention center expansion, 385 residential units, 575,000 square feet of office space, 42,000 square feet dedicated to street-level uses, below-grade parking for 700-800 vehicles, and below-grade loading services.

This is a great initiative, which many of the city’s well-wishers have lauded, including George Freeman during his run for city council. However, a 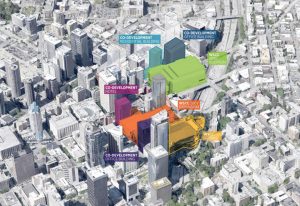 little competition never hurts. And a need exists for greater commitment to making Seattle’s skyline compatible with the rest of the modern world. This will allow Seattle to compete with other cities on the national scale, like New York and San Francisco. Recent directives by the FAA to strike down a plan for what would have been the Seattle’s tallest tower, question the city’s commitment to pull the city out of the stunted-growth phase that it’s currently suffering from.

Further proof of Seattle’s inability to host for major national events is seen in the  decision to pass on the invitation by the Democratic National Committee to bid for hosting their main conference is one of many poor decisions taken by the city. Yes, there is some merit to the decision insofar as realizing that the city lacks sufficient capacity to meet the requirements for hotel rooms, convention space, and other amenities that such occasions need,but it is also troubling to see that there is not enough commitment being shown to invest in the infrastructure that the city drastically needs in order to draw in these yearly revenue opportunities.

Additionally, while increasing the capacity needs of the city’s is urgent,  other mid-tier opportunities exist that Seattle could try and avail itself in the meanwhile. Future conferences, seminars, festivals and national events yet to finalize their venues should be considered, now would be the time for Seattle to mobilize its PR team and get the ball rolling.