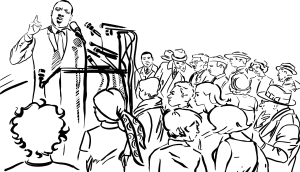 Last week marked the 50th anniversary of the death of Martin Luther King Junior. This is a time for contemplation on his life and the struggles he lived and the cause he breathed air into. From the Montgomery bus boycott to the March on Washington, he led the way for peaceful civil disobedience in the face of injustice. He paved the way for many other men and women to rise in the face of great opposition, to hold on to their convictions above all else, and persist in the darkest of times.

King was, by all measures, a nonconformist. He chose to stand by people, communities and ideologies that were unfashionable and shunned, and at times even dangerous to speak about. One such incident was his stance on the Vietnam War, which even turned many liberals against him. His speech at Riverside Church in upper Manhattan, was nothing short of a blistering attack on the government’s unjust aggression in the Vietnam War. In one of his sermons, he said “a man cannot truly be a man unless he can be a nonconformist”.

Reverend King’s convictions encouraged men from all walks of life to feel propelled to contribute to the cause of human liberation. For George, the history of Dr King is a salient memory that contributes his mission in life. And as the man behind Seattle’s Monastery Church, George attempted to create an atmosphere void of discrimination. The Monastery opted to open its doors to people of all backgrounds. With open arms he welcomed in the homeless LGBT youth of Seattle, who made up 40% of the homeless people in the city, at a time when there wasn’t much acceptance for them and their identity. The church offered them refuge and tried to inculcate in them a sense of hope where there had only been despair.

It is this motivation for improving the lives of their fellow citizens, with the selfless intent of seeing others prosper, which makes a giant out the average man. Though the world continues to be marred by great injustice and oppression, individuals like Martin Luther King Jr. offer a ray of hope and the strength to rise against great odds.