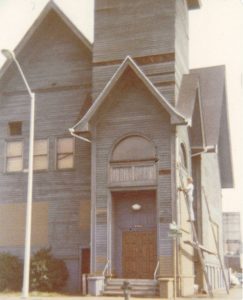 You can still find it. That old-world animal spirit synonymous with Pagan harvest festivities and ancient Aztec rituals. You can find it in Mardi Gras and Carnival: individuals opening up and becoming part of the masses, losing themselves in a new dimension only to, hours later, realize that they have been transported to the other side. Now, however, they are free of the weight of regret, the heaviness of solemnity, and the piousness of conventional church rules.

The stewards of Christianity promoted festivals such as Carnival and the Feast of Fools, confident in the benefits of allowing church followers a brief respite from the monotony of self-control. And then, just like that, the church disapproved of these same traditions, labeling dancing as the devil’s work.

But what is the church? On the one hand it is a physical house of worship, but it is deeper than that—church is an idea, an evolving idea tended to by a revolving cast of characters.

There were spiritual places long before there were church houses … individuals gathered to forget their individuality, to lose themselves in the sway of the group, in the wild freedom of just letting go…

The church as a building, however, is stagnant—it can be demolished or abandoned, but it is the will of its community who keep the faith for which it stands. Some might view church as a place of dance-based worship. Lauren Michele Jackson argues that churches have been a gateway to music since the dawn of religion. Jackson says from Marvin Gaye and Aretha Franklin to Katy Perry, “God is a DJ, the church is a dance floor, that dance floor is life. Church is life.”

But there were spiritual places long before there were church houses. Places where, as Barbara Ehrenreich notes in her book Dancing in the Streets, individuals gathered to forget their individuality, to lose themselves in the sway of the group, in the wild freedom of just letting go.

Ultimately, we will always find this discussion back on the topic of first principles. What if a different group of people ran a different type of church? Take, for example, the Universal Life Church, or George Freeman’s purchase of a run-down church he subsequently transformed into The Monastery. Using the very same edifice built by Christianity, he connected to the church’s past acceptance of revelry, fusing dance with the ideals of refuge and equality. In this safe space, disconnected from organized religion, the misunderstood joined together in dance as an antidote to the troubles outside.

Though this freedom used to be welcomed in the church, used as a safety valve to ease the pressures of religious piety, over time this joyous uninhibitedness has had to seek shelter outside the inflexible bounds of the Christian church, out in the street where the ideas of religion, including Christianity, were born and originally spread.