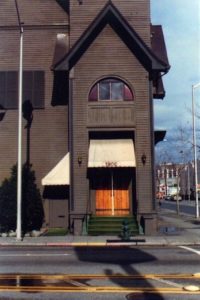 In 1977, George Freeman, a New Yorker, moved to Seattle and found a derelict church with a “For Rent” sale on it. Being the opportunist that he was, he formed The Monastery Church, focusing his attention on turning it into a night establishment. On May 19, 1979, Freeman was ordained as Presiding Minister for The Monastery, A Universal Church Congregation. Reverend Freeman was fundamental to the advancement of the church and eventually used the space as a nightclub and a refuge in the downtown neighborhood of Seattle for adult and youth communities.

On January 1st 1982, Reverend Freeman was on trial in front of The Board of Tax Appeals because he was accused of owing a little over one thousand in back-taxes, which went to a court case. Reverend Freeman challenged this and claimed that he was exempt from the fees. Reverend Daniel Zimmerman, the administrative assistant to George Freeman, claimed that all the funds given by the members of the congregation were voluntary and that Reverend Freeman had always acted properly in the collection and distribution of church funds. This was because the church was, in fact, a nonprofit organization. In addition, Reverend Freeman rightfully claimed that the space was a shelter for the many homeless gay youth and adult population of Seattle; as such, the space was both a benefit to the community as well as to the congregation. These claims were successful, and the judge ruled that the property was tax exempt as long as the space was for church purposes.

Despite the opposition by the police and other members of the local community, the judge decided that The Monastery was fundamental for Seattle’s disenfranchised youth and provided a necessary community service. The Board of Tax Appeals continued to dispute the that The Monastery, Universal Life Church, Inc., was a church despite the fact that it stood for such vital causes. However, the court was decided that the dancing equipment and speakers were not part of typical church activity and were therefore taxed.