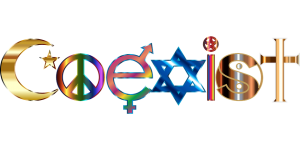 The First Amendment guarantees that all Americans have religious freedoms by law. They are free to practice and free to abstain from religion. The United States was founded on principles of freedom of expression and originated as a melting pot of different religious beliefs, races, and cultures. Religiously persecuted Europeans sought to escape punishment for their beliefs and practices that existed outside the accepted paradigms of mainstream religions.

Unfortunately, under the current administration, there are fundamental threats to religious diversity, despite the administration’s claim to the contrary. The current guidelines state that, “Religious employers are entitled to employ only persons whose beliefs and conduct are consistent with the employers’ religious precepts.” (Source: Justice.gov). This is a significant step backwards in the inclusivity for citizens and workers, because companies are free to discriminate during the hiring process based purely on the religious beliefs and practices of the applicant. This encourages exclusivity and further polarizes those from different religious affiliations away from each other. Establishing this legal precedent allows the future discrimination against other groups, such as sexual orientation, gender or even age.

For those who have experienced social discrimination these laws will sound a warning bell. George Freeman, believes in the future of the United States…he served his country, experienced racial segregation first hand and has been an advocate, and practitioner of social justice his entire life.

Coupled with this, companies are allowed to refuse service to whomever they choose if it goes against their religious beliefs. For example, a gay or lesbian couples can be refused services even though they are, by federal law, protected against discrimination. This presents itself as a significant issue, and there aren’t sufficient boundaries put into place to stop the Trump administration’s guidelines from being further abused. A company’s religious beliefs could be used to deny a variety of medical procedures to individuals. This is not protecting religious freedom, but rather enforcing the interpreted ethics of the dominant religion to suit a more ideologically-driven, exclusionary agenda.

For those who have experienced social discrimination these laws will sound a warning bell. George Freeman, believes in the future of the United States. As a World War II veteran he served his country, experienced racial segregation first hand and has been an advocate, and practitioner of social justice his entire life. Freeman founded the Monastery, an inclusive religious institution coupled with a nightclub that provided an open space of expression for all, including downtrodden youth, homeless individuals and shunned homosexuals. The Monastery was ingrained in the culture of Seattle, yet it was pejoratively referred to as merely a “gay club.” It was, in fact, a club for people from all walks of life and was firmly representative of Seattle culture. It is fundamental to study at the work of inclusive activists such as Freeman to provide communities with a safe place to exist and express themselves, in order to promote rights for those from all backgrounds.